On December 11, 2018 the Michigan Department of Agriculture and Rural Development issued this statement:

LANSING, MI – Boxwood blight, a serious fungal disease that attacks boxwood (a popular landscape shrub), has been detected for the first time in Michigan. The disease was found in Oakland County in three separate locations: a landscape firm, a homeowner’s yard and in holiday wreaths being sold at a retail store. The Michigan Department of Agriculture and Rural Development (MDARD) was also notified by the Wisconsin Department of Agriculture, Trade and Consumer Protection that infected boxwood may have been sold at other retail locations in Michigan. 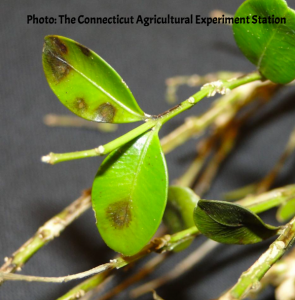 “Boxwood blight is a devastating disease that has caused significant losses to homeowners and the nursery industry in states that already have the disease,” said Gina Alessandri, Director of MDARD’s Pesticide and Plant Pest Management Division. “In Connecticut alone, the first year after detection, boxwood losses in field-grown and container nurseries exceeded $3 million and we could see a similar effect in Michigan should it become widespread.”

Boxwood blight produces dark brown leaf spots and causes rapid defoliation that sometimes kills young boxwood. Boxwood blight first appeared in the 1990s in the United Kingdom and is now widely distributed in Europe. In the United States, the disease was first found in 2011 in Connecticut, North Carolina and Virginia and has since spread to more than 24 states. Boxwood blight affects all species of boxwood; however, some species and cultivars are more susceptible than others. American boxwood and English boxwood are highly susceptible. This disease also affects the related shrub, sweetbox and Pachysandra, a common ground cover. Boxwood and Pachysandra are commonly used in commercial and residential plantings throughout Michigan.

Wreaths displayed outdoors are a potential concern if they are exposed to the elements. The biggest risk comes when people dispose of the infected wreaths after the holidays. MDARD recommends that anyone who has a wreath containing boxwood plant parts should consider it infected and dispose of it by burning or, even better, double-bagging it and including it with their trash for deposit in a landfill.

Alessandri advised that anyone who suspects that they have plants infected with boxwood blight should contact their local MSU Extension office.

Top
We Are Open during the Corona Virus Pandemic.
1st application is extended to June now using Dimension fertilizer for crabgrass pre emergence.