Mowers and other repetitive movement can leave tracks on lawns during hot, dry weather. 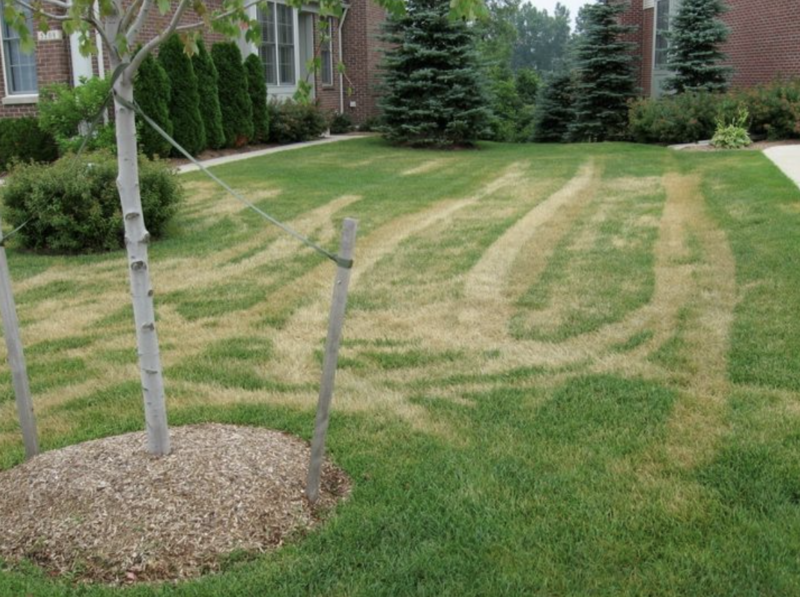 Heat tracking damage from a mower.

The recent combination of temperatures in the high 80s and low 90s combined with a lack of precipitation has resulted in many instances of heat tracking damage on lawns from equipment. Heat tracking is damage from any trafficking on turf when it is stressed from high temperatures and lack of water. Often, heat tracking is the result of mowers running over the turf when it is near the wilting point, but damage can result from any traffic, whether it’s equipment or even just enough people walking the same path. Some will misdiagnose tracking damage as being from a pesticide or fertilizer application. The resultant damage may look like a non-selective herbicide was on the tires of the equipment, but it’s simply from traffic on turf when the turf is near wilting point.

The only way to really avoid this damage is to avoid trafficking turf during the hottest time of the day when the turf is under stress. Unfortunately, it is not always easy to tell when this damage is produced. On some days and sites, tracking damage could occur relatively early in the afternoon. On other sites, it may happen later in the afternoon. Mostly it depends on soil moisture and the ability of the plant to cool itself through evapotranspiration. As temperatures rise and soil moisture becomes depleted, the plant will stop transpiring and begin to heat up. This is the time when turf becomes susceptible to tracking damage.

Although heat tracking and wilt damage can look really bad, in almost all cases the damage is not fatal. Irrigation, rainfall and cooler temperatures will help the turf recover.

Top
It's Fall, time to start thinking about aeration and over seeding. Call for Pricing